There have been some classic cheap shots throughout boxing history, and some have resulted in huge controversies such as all-in brawls and even criminal charges. Here are some of the worst cheap shots. 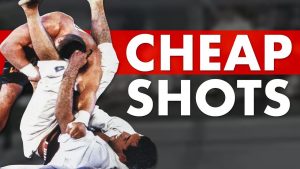 Ortiz hit Mayweather in the face following an intentional headbutt. Suddenly Mayweather was bleeding from a cut to the mouth following the incident. Ortiz was penalized a point for the foul and Ortiz wanted to show he did the wrong thing by hugging Mayweather. When Cortez looked away, Mayweather got Ortiz with a left hook. Ortiz was hurt and then was hit again with a right to the face. Ortiz was knocked out, and Mayweather got back at his opponent.

Mayweather Gets Hit by Judah Below the Belt

In the tenth round of the match, Judah hit Mayweather below the belt followed by a right to Mayweather’s head. Mayweather was in pain and Mayweather was given a rest. Then Rodger Mayweather entered the ring and Judah hit him resulting in a brawl and big trouble in the stadium. Security officers and police had to control both camps. Mayweather won the match unanimously. Boxing is a vengeful sport and Judah suffered terribly later in his career.

Andrew Golata has a reputation for making controversy having been in brawls in the ring and also having a reputation for cheap shots. In the fight against Riddick Bowe, he was warned continually for hitting Riddick below the belt but still persisted and hit Bowe below the belt resulting in Golato’s disqualification and Bowe’s knockout. There was a riot across the stadium. Police, officials and even Golata were hurt receiving stitches after somebody from Bowe’s camp hit Golata with a radio in the head.

Low blows can be an accident, but some shots are obviously cheap and can cause chaos in and outside the ring.