Eric Esch, better known as Butterbean, was one of the most memorable and entertaining fighters of his generation. His massive frame of over 400 pounds made him look overweight. Still, Butterbean, from Alabama, proved that the unconventional, and not necessarily the prettiest, boxers can be the most devastating.

What Made Butterbean Exciting to Watch 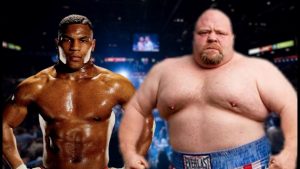 Butterbean’s difficult childhood and being bullied was a story which many could identify with and gave Butterbean many curious allies in the crowd. He also used some unconventional punches to try and hurt his opponents, such as the haymaker; this is a punch in which the elbow is moved sideways in line with the shoulder without too much elbow bend. He often looked like he was swinging wildly.

Butterbean also looked unconventional and didn’t have the bodybuilding physique of a boxer, but instead had a massive waistline making him broader and more challenging to move around when being attacked. His trunks were always the American flag.

Butterbean knocked many opponents out in devastating fashion. He was also more than just a boxer, having been in several tough man competitions before his life as a professional boxer. He also went on to a career as a kickboxer and MMA fighter after his professional boxing career ended.

He had more than 300 bouts under his belt on retirement. He also won 77 of 91 matches during his career with 58 being knockouts. Overall, he won more than 100 fights in boxing, MMA and kickboxing. He now spends a lot of time outdoors and fishing with his grandchildren. He makes handmade pens and lives away from the spotlight.

Butterbean proved many of the people wrong who scoffed at his large stature and unconventional style. He became a national icon for his entertaining style and ability to try different styles of fighting. He will be remembered for his knockouts and barroom brawl style.