Home  »  Uncategorized   »   Fury is training hard to fight against Wilder

Tyson Fury released more images preparing before the confrontation with Wilder.
Compared to the last fight in 2018, the British boxer seems to be a giant with a weight of up to 270 pounds (nearly 122.5 kg).

In the latest photo taken with his coach, Fury shows off his big body and a “big belly”, and at the same time, showing great confidence. The former world heavyweight champion has vowed to defeat the American opponent after failing to win the first encounter last year.

“Why do people think I will play the old card? So I often consider a tie as failure. I consider it a loss, and so should Wilder.
I would be a failure if I just looked at the score. I’m here just winning or nothing but if I lose I, lose in a great game. I would be willing to leave on an ambulance stretcher instead of trying to play safely and lose points immediately. That’s what makes me different. ” 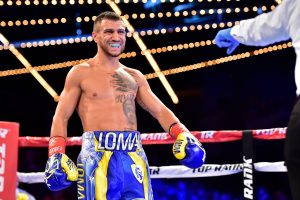 It is unclear whether Fury’s secret will work, but now the “Gypsy King” has begun to find a way to make his punch tougher as an action to counter the critics word for him. He is now under a lot of pressure for the next fight with WBC boxing champion Deontay Wilder.

At the first match, Tyson Fury was defeated by the movements of Deontay Wilder. However, because of playing too safe, Fury gave up putting pressure on the opponent. This has made Wilder confident enough to perform his best to defeat Tyson Fury..
Because it was too safe, Fury let Wilder let our his energy and then give Fury 2 unforgettable knock out. And because of playing too safe, until the end, both Fury and Wilder had to leave empty handed with a head full of controversy.

The rematch between Deontay Wilder and Tyson Fury will take place on February 22 at the Grand Arena, Las Vegas.