Former WBO champion Joseph Parker brought an unexpected outcome in the great war between Wilder – Fury part 2.
Only a few days before the rematch between Deontay Wilder and Tyson Fury will officially take place at the Grand Garden Arena (Las Vegas). 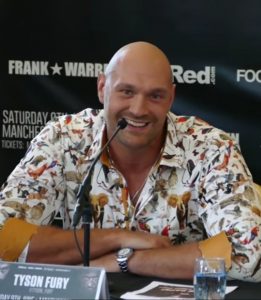 It will be very difficult to overwhelm Wilder, he proves he has a good chin and is one of the boxers who possess the strongest punch in the world.

“I have seen Fury and his team practice a lot in the gym. Overall, Fury looks pretty good. After that, the movements moving forward and backward in the movements showed that he seemed to want to attack, launching more punches and being more aggressive. ” Parker spoke on VegasInsider.

When asked for predictions about the outcome of the second match, Parker added. “I like different opinions of people. It is a wonderful thing and it will be extremely interesting to see the upcoming competition.
Everyone knows why the previous match was so controversial, because it was so tight and dramatic. It will be very difficult to overwhelm Wilder, he proves he has a good chin and is one of the boxers who possess the strongest punch in the world. He is a talented guy. However, I believe Fury can eliminate the same approach as before. I believe Fury’s ability to defeat Wilder ”. Parker closed.
At the present time, both Deontay Wilder and Tyson Fury have accumulated for themselves 2 more wins since their first encounter.

The match between the two will affect the progress of the heavyweight in the near future, when other names like Anthony Joshua or Oleksandr Usyk have had important victories before. The rematch of Tyson Fury – Deontay Wilder 2 will take place on Sunday morning of February 23