Home  »  boxing   »   Interview with Joseph Parker: about the Usyk-Chisora fight, the strongest opponent and the dream fight

Former world heavyweight champion (over 90.7 kg) new Zealander Joseph Parker (27-2, 21 KO), staying in self-isolation with his family in his home, held a video conversation with a journalist of the British news portal Boxing Social.

To your attention — translation of the most interesting questions and answers from vRINGe.com.

— The only shot that caught me well was Dillian white’s. He knocked me over. Dillian delivered a cleaner blow. 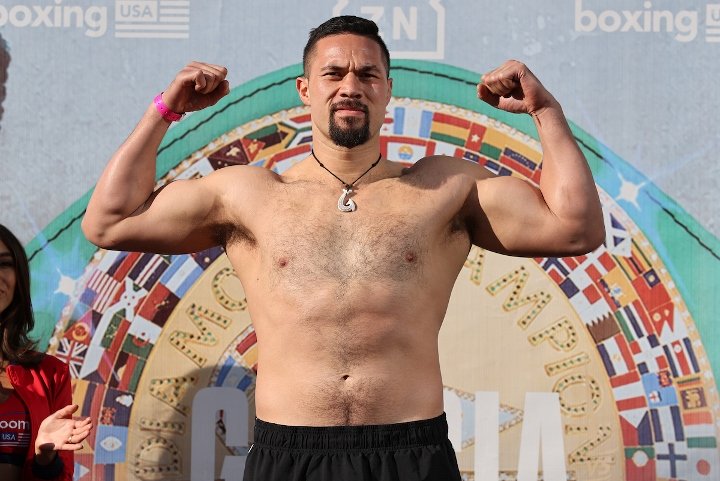 – Usyk-Chisora will be a good fight. Do you think Usyk has everything you need to succeed in this fight?

— He was a great fighter in Cruiserweight, United the belts. He has a lot of skills, a large selection of strokes, good fitness, good movement. I think he has what it takes to beat Chisora, even though Derek is a tough fighter.

— Given the past and present, name the fight of your dreams.

“With Mike Tyson.” Because I want to feel its power.

— Who is the strongest fighter from those with whom you were in the ring?

— For missing a shot and feeling good after it, I would call Andy Ruiz. He hits hard enough. He landed his punch right in my ear and caused me a lot of discomfort. I couldn’t hear for the whole fight after that, and it was the third round. It kind of stung me.

— What is your favorite fighter in history?

— I like Muhammad Ali, Lennox Lewis, Leon Spinks, Larry Holmes, a lot of them.

— Which rematch do you want to spend the most now: with Joshua, Ruiz, or Dillian white?

— Right now with Joshua, because he has titles. I will be able to become a world champion and will be closer to the title of absolute champion. In this regard, a meeting with him would be preferable. I would also like to have a rematch with Dillian white, because I lost to him and he talks a lot.

— Would you fight Wilder?” How would you beat him?

“Yes, I would fight him. But he doesn’t have a title now, and I’m trying to become a world champion. He was a champion, a powerful man. How would I fight him? I think fury set an example. Even though fury is taller than me, it would still be pressure. I would make every effort to do so. Well, we need to rule out a meeting with his right.