Mike Tyson was known for his devastating and highly efficient boxing style which could knock opponents out in the early rounds. However, Tyson has also been in trouble throughout his career on several occasions. 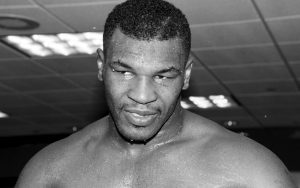 Tyson famously bit Evander Holyfield’s ear right off after Tyson believed that he had been headbutting him during one of his biggest fights. Tyson was fined three million dollars and lost his boxing license for a year but eventually regained it. The fight generated huge profits for pay per view.

Tyson also was notorious for having some shocking interviews with journalists telling a number of them, and other interviewers, about his sexual needs. He also used some language which was cut off quickly by television broadcasters, giving him a notorious and intimidating reputation. The shock value resulted in enormous profits for his fights.

Tyson was also jailed for six years for rape but only served three years. He also had a long history of criminal activity as a child due to his tough upbringing in Brownsville, Brooklyn. His mother was a drug addict, and he tried drugs early as a child. This caused apparent consequences for him as an adult.

He was also famous for menacing pre-fight quotes and behaviour, staring down opponents and trash-talking other boxers. He has said that in interviews he was able to win the fight even before entering the ring by intimidation. He was also famous for dressing room antics, such as smashing in the walls. One such example is the match against Mike Spinks, who was visibly intimidated by the time he entered the ring.

Despite Mike Tyson’s notorious reputation and long history of troubles, he has now tried to turn his life around and dedicates it to his family. He has even delved into vegetarianism and is now a Muslim.